I Have Perfected Resistance 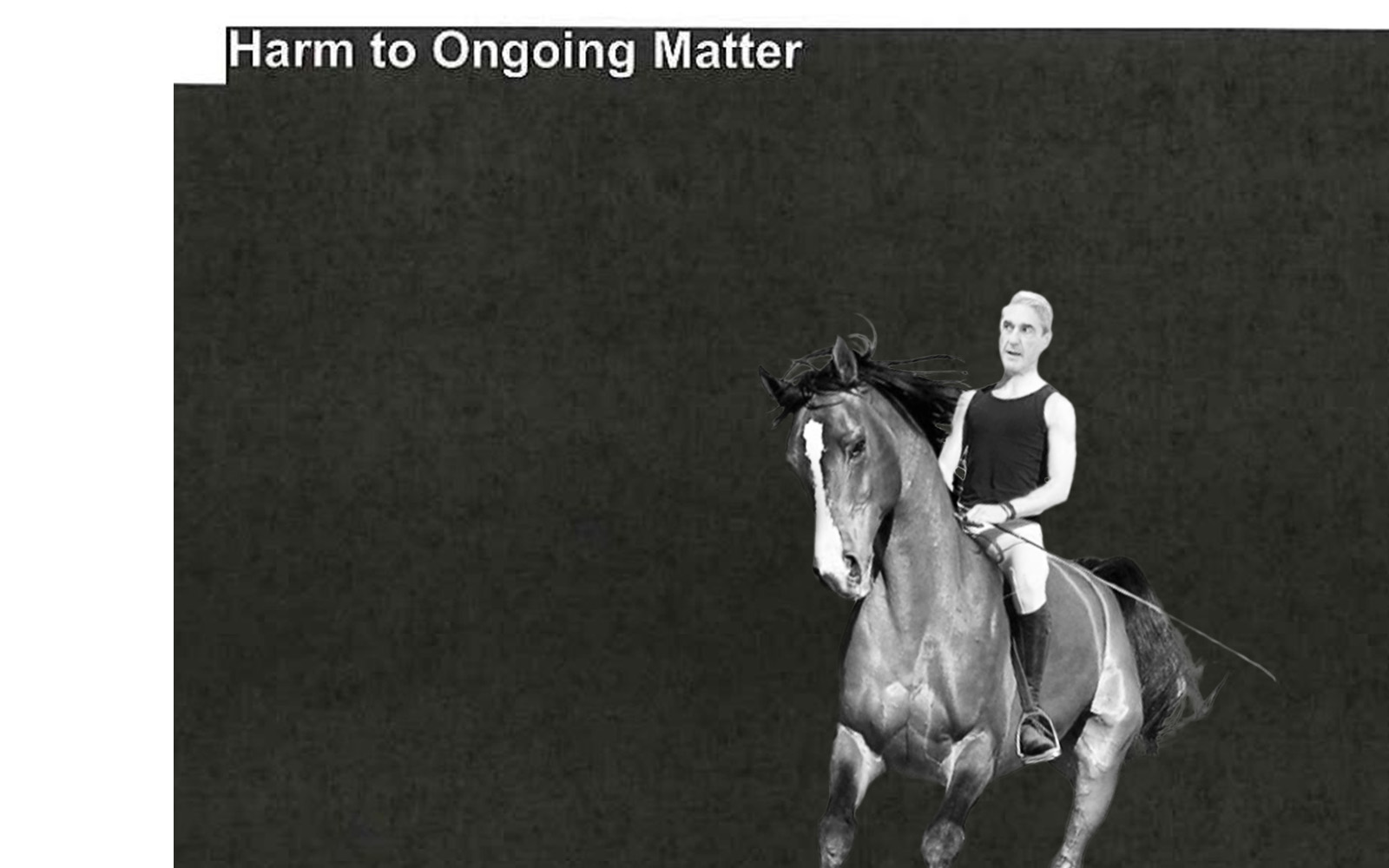 With the snow still melting on the streets of Montréal, the song of the summer dropped early this year. That is correct! Ladies, men, non-binary friends: It is time for [*airhorns*] the Mueller Report! The most blogged-about document that none of us have actually seen is now at least partly available for a half-dozen people to read in its entirety.

Notable tweeter who also happens to teach communications professionally for a living Seth Abramson reacted to this development as only he could, with a 451-tweet thread stretching from 14h45 on 17 April to 00h46 on 19 April. Here are some highlights:

69/ Remember that "collusion" is *not* a legal term: but it *is* an umbrella term for a series of federal criminal statutes the violation of which would, in a speaking indictment, be undergirded by (broadly speaking) "collusive" conduct in the commonsensical sense of that word.

420/ (TRUE STORY) When I was in college, I was a radio DJ—and the only music I played was psychedelic music from 1966 through 1971 (I *spat* on everything before and after). I only had *one* listener I knew of: a pizza delivery guy who'd been at Woodstock. https://t.co/PXwFZH81Xz

CONCLUSION/ I'm not going to cover obstruction here, for the reasons I've stated in-thread. I'm just going to note that collusion occurred; other conspiracies are still being investigated; and the national security threat Mueller's evidence clearly establishes is *unabated*. /end

As someone who teaches communications unprofessionally for what barely amounts to a living, I posited a quick-and-dirty iron law of tweetstorming in the midst of the morass:

Anything over 8 posts long cannot be adequately conveyed 180 characters at a time no matter how far you stretch it and absolutely must be a blog post.

Do notice that I was so fatigued by this nonsense (everything happens so much) I did not even get the max character count correct. Consider this to be me making good on my ramblings and eviting the tweetstorm.

I was at a loss for how to respond to the Mueller Report in a manner which is fresh, interesting, and insightful. You see, unlike everyone else on Twitter, I did not suddenly matriculate from a law school the night prior. There is something to be said for the stunning, stark redactions that blanket the text: 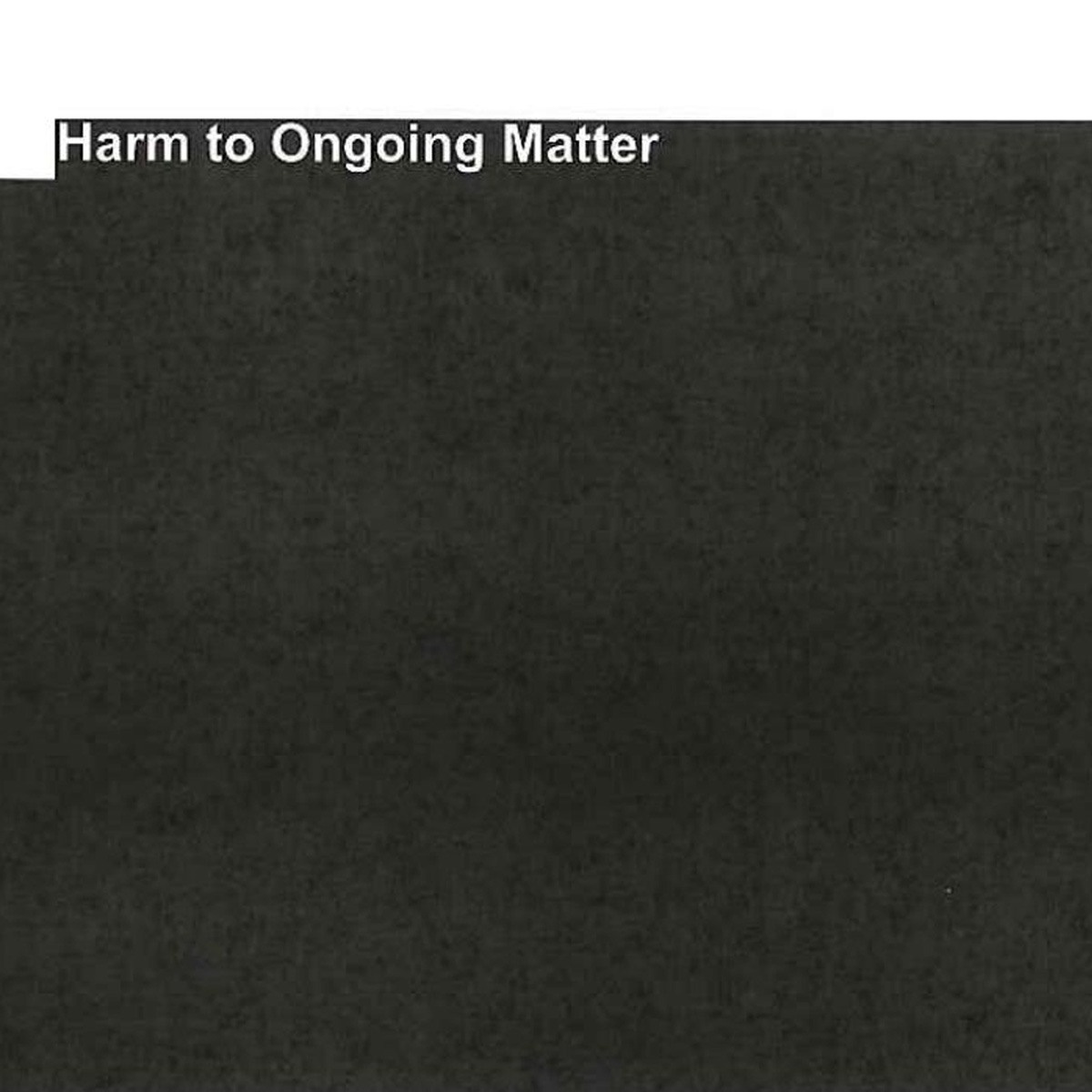 The work is quintessentially American in its treatment of negative space. To quote from the Vignelli Canon:

The relationship between the size of type and the space around it is one of the most delicate and precious elements of a composition. I must say that the masterful handling of white space on a printed page is perhaps the most peculiar attribute of American graphic design. Just like space is the protagonist in Frank Lloyd Wright’s architecture. Somehow, it relates to the epic grandeur of the American landscapes.

The Mueller Report, with its vast expanses of unreadable noirceur, punctuated only with the occasional, spartan disclosure of the content’s reason for redaction, is a stunning work that is firmly within the American tradition. There is something proletarian about its selection of Arial over Helvetica for the redactions. It is a document of the everyman, populist. It suffers not from abundant choice and typographic sense, as the work of a designer, and instead operates comfortably and incuriously within the system fonts of Microsoft Windows.

I borrow from Vignelli because the work reminds me of Vignelli. In those redactions, those unending seas of black defined by a white geometric sans in the upper left, I catch glimpses of the Unigrid. 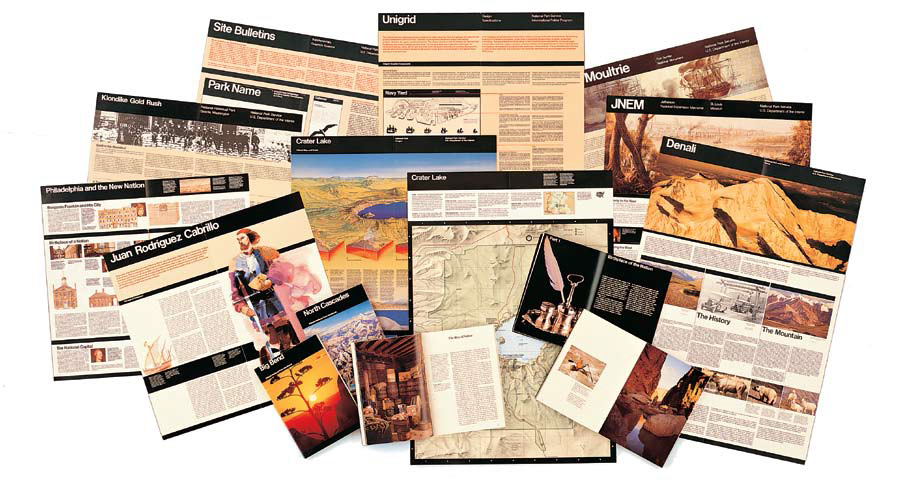 The Unigrid is a graphics system conceived by Vignelli to standardize government publications across the National Park Service. Its purpose is to decrease the number of routine decisions NPS designers must make with ten basic formats, increase economy by streamlining production down to just two paper sizes, and ensure that governmental communication is clear and readily recognizable. Early iterations, like the Mueller redactions, opt for Helvetica (because Vignelli had sense, you see) headings and a Times New Roman body. As time wears on, NPS has switched to Adobe’s Frutiger for the headings and a custom Garamond variant titled NPS Rawlinson from Terminal Design in the body. However, as Mueller certainly knows, the original is always the best.

But I feel the document, a substandard and quotidian piece of communication, has less to teach us about communications than the reactions it generated. I speak, of course, of the professor of communications who responded to it by authoring a meandering, 451-tweet thread.

Abramson is not a stylistic orphan. For a coterie of the extremely online, communicating their outlandish interpretations of current events in punishingly long Twitter threads that push far beyond where is responsible given the existing body of evidence is de rigueur. I want to be somewhat kind to the Garlands and Abramsons of the world today, for this is their moment: The big show. These accounts are convinced – absolutely convinced – that the terminus of the Special Counsel investigation is Donald Trump in handcuffs. Here, with the release of the Mueller Report, they are presented with the single most significant source document in their apologue of patriotism and divine justice. It is an apogee. It is the most attention any of them are likely to receive for the rest of their natural lives, so they should be permitted to enjoy it.

It is fitting that at this moment, the apogee of how these accounts tell us that resistance to Trump is to be effectuated, I have introduced the perigee of thoughtful Twitter engagement. I have accomplished what Abramson could only dream of as a mortal Twitter personality. What if there is an incoherent stream of Mueller Report analysis culled directly from the source document that never, ever ends? 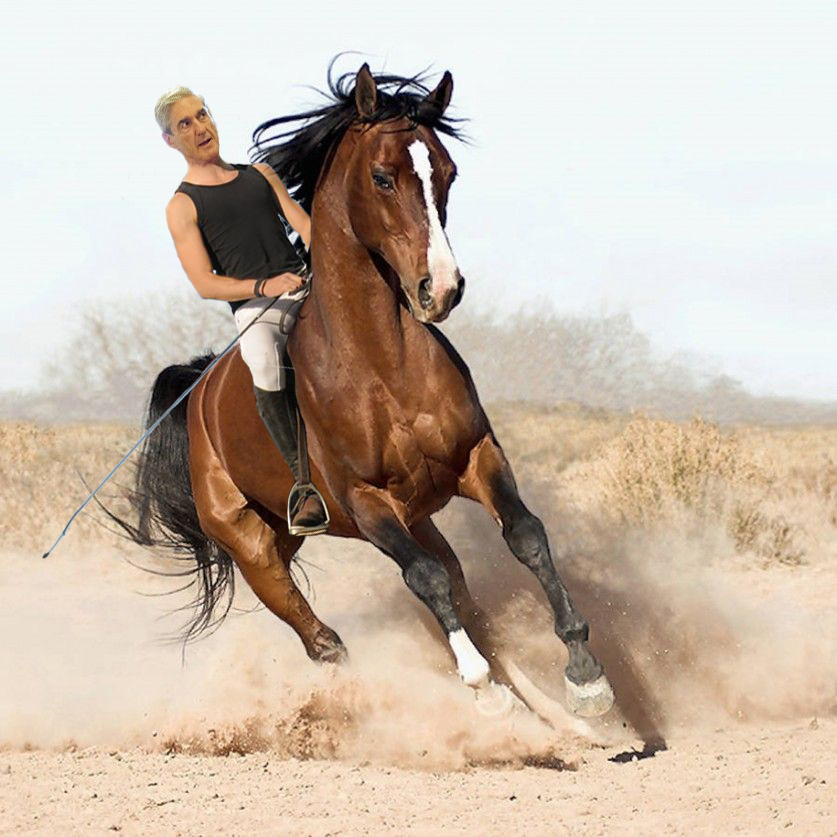 An _ebooks bot (the horse-y one not included) autonomously takes a corpus of given text and nonsensically patches it together into something which, if one squints, may resemble a cogent thought.

Twitter-based Resistance Grifters take a corpus of reporting and primary-source documents about a serious matter and nonsensically patch it together into something which, if one squints, may resemble a cogent thought. I sense an opportunity for synergy. Working together, these two Twitter use patterns can effect a quality of divine, transcendent nonsense that neither could comfortably reach on their own.

I.e., Their negativity only served to push me deeper into the realms of bot making.

_ebooks bots generate their superficially real-looking tweets through something called Markov chains. A Markov chain allows for the prediction of a future state based on characteristics of the present state. Think of it like a big and heinously inaccurate predictive text generator, not dissimilar to the speech patterns of Donald Trump himself. You can see the code for the Markov processes I am using for this project on GitHub.

The Markov generator does not try too hard:

It worries not how to handle footnotes. It grabs big chunks of full stops from the table of contents. It assembles a compelling story.

The corpus of text chosen for this exercise is that fetish object which has motivated Resistance Grifters from the very outset: The Mueller Report. To be more specific, it is a poorly-OCRed copy of the Mueller Report. (A partial sample of which is available here.) To this mess, I added a couple Unicode redactions to ████████, flavour, ███, and colour the text.

White House Counsel's work, both urged the Principles of multiple occasions after Corney's loyalty.183 The President's interactions with the fall of2015 and the Attorney General, who [Trump Jr. to get it?

This means that one can follow along on the dirty-Xeroxed adventures of Jim Corney and the whole gang.

It is speculative Trump fanfiction tweetstorming taken to its logical terminus. It examines the much-ballyhooed document at the centre of this intrigue poorly, chops it up, and assembles it into things which sometimes look to be ostensible sentences. The Conspiracy Tweeters cannot possibly out-Markov a Markov bot. This is the end, the mechanized, interminable end.

This exercise is also very much in the spirit of the work of one Seth Abramson. His academic expertise lies not in the practice of politics, but literary meta-modernism. Meta-modernism is far beyond the scope of this article and not a subject to which I can do justice. I will defer to Vermeulen and van den Akker describing this purported trend as “oscillation between a typically modern commitment and a markedly postmodern detachment.” (I also found this paper by J.T. Welsch to be instructive.) Meta-modernism in literature displays a preoccupation with “remixing” (i.e., copying) the words of others, imitation of form, and the act of intentional uncreativity. These traits are on full display in John Beer’s The Waste Land and Other Poems. Per Kenneth Goldsmith:

“It’s not plagiarism in the digital age  – it’s repurposing.”

Per Shia LeBoeuf, “repurposing” Goldsmith without attribution in a meta-modern manifesto:

“It’s not plagiarism in the digital age  – it’s repurposing.”

Repurposing, if it is indeed art, does still demand a modicum of tact. This landed Abramson himself in hot water when, in 2014, he distastefully derived poetry from the Isla Vista mass-murdering incel’s manifesto.

So, here we have a deliberately uncreative bot, mimicking the form of a Weird Twitter phenom from half a decade ago right down to the avatar. Its creative works are entirely derived from the words of another – in this case, the Mueller Report. Markov processes are also indeed an exercise in what Abramson may call “ordered nonsense.” It is besting Abramson in his own topic area, and with a meta-modern work, to boot.

This bot – as all good Twitter bots should – follows Darius Kazemi’s etiquette suggestions and adheres to the Twitter policy on automation. And it will never need to sleep, eat, or take a break.

I take no pleasure in reporting this, but I have joined the Resistance Grifters. I will deliver an uninterrupted stream of words resembling sentences about the Russia investigation, culled from source documents, into your homes until the total heat death of the universe or the dismantling of Twitter, whichever comes first. But, in a way, it is liberating: You no longer have cause to buy any of their books, when what I have implemented is just as good.

Hey! I write TheRedChannel to increase civic-minded visual literacy. I make everything I do available to the end user without advertisements and free-of-charge, and I think it is important to try and keep it that way forever. If you saw something here that made you happy today, please do consider helping to keep the lights on and the servers running.

Finance my Blackwater retreat in the Seychelles? ♥

If you saw something that made you unhappy today, please flame me on Twitter!